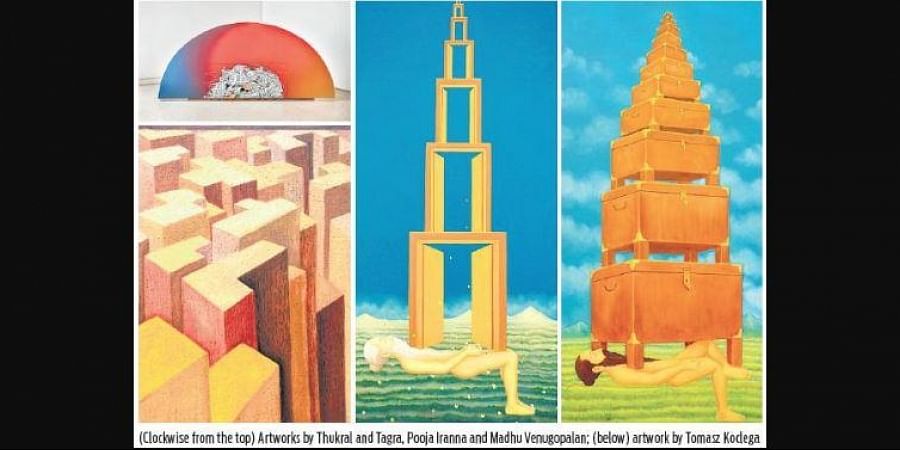 About the term ‘narrative’, French philosopher Roland Barthes had said that “it is present at all times, in all places, in all societies; indeed narrative starts with the very history of mankind; there is not, there has never been anywhere, any people without narratives; all classes, all human groups have their stories.” Bringing out such untold ordinary stories that haven’t been given any significance historically or in our times today is The Sundry Effect: The stories we are…, an ongoing exhibition at Bikaner House. Organised by Gallery Ragini and curated by Meena Vari, the exhibition showcases 15 artists.

Talking about the show, the gallerist Nidhi Jain from Gallery Ragini said, “The Sundry Effects… was envisioned by Vari to evoke a response on the stories in the shadows, lost pieces of history or contemporary issues that are conveniently put on the back burner. I am so moved by the reaction of the artists who have come forward with deeply emotive and thought-provoking translations of the sundry effects.” Shedding light on the idea behind the show, Vari, has also been curating works of Indian Contemporary Art in India and abroad since 2008, said, “The idea behind the exhibition is to put together some of the stories that was a part of our history but were lost.

Also, some works talk about the stories of the present time,” said Vari, adding, “These are the story trails that chart out our realities today, from the farmer- related stories by Thukral and Tagra, climatic collapse by Vivek Vilasini, the ayahs who left India after Independence by Cathy Lane, the 100 portraits of the Kashmiris by Veer Munshi to the story highlighting Varanasi by Gigi Scaria, amongst others. The show juxtaposes the dust of Delhi with eclectic portraits, interspersed in the show are sound installation, painting, sculpture, photography and film works.”

The selected artists have been working on narratives of the past or by creating new ones. Vari, who has been studying their work and selected the ones on display, said, “If I have selected Madhu Venugopalan from Kerala, it is because I have seen his work for the past 10 years. Similarly, Veer Munshi has been talking about Kashmir and how the Pandits had to leave. All his work revolves around memory and he is trying to bring those stories out. Lastly, Vivek Vilasini, who has worked along the lines of memories and housing memories, is the result of a month-long work.” AT: Bikaner House, Pandara Road, New Delh.