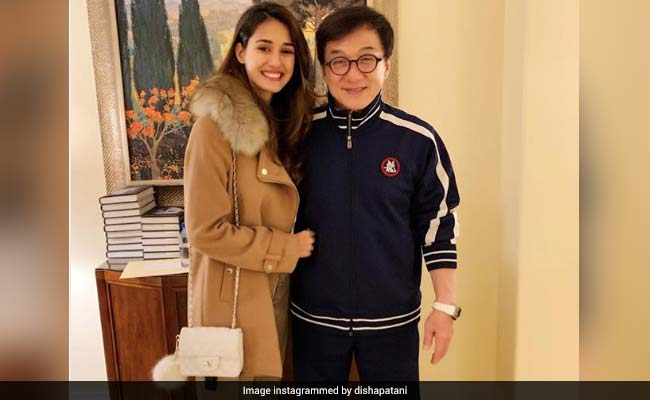 Actress Disha Patani, who co-starred with “the living legend” Jackie Chan in 2017 film Kung Fu Yoga, wrote a special message for the actor on Instagram. The photo shared by Disha appears to be a throwback in which she can be seen standing next to Jackie Chan. In the post, the 26-year-old actress referred to Jackie Chan as the “most humble and kindhearted person” and wrote that she is “grateful” to have worked with him. “Dear tagu, You’re the most humble and kind hearted person I’ve ever come across, your talent has spoken for you for years and that’s why you are called as “the living legend” , I am so grateful to meet you and of course the luckiest to share screen with you. I’ll always be your biggest fan, god bless you,” Disha Patani wrote.

The photo has close to seven lakh likes in less than five hours. Tiger Shroff, who is rumoured to be dating the Baaghi 2 actress, also left a comment on the picture. “Legend,” Tiger wrote on the picture shared by Disha.Apart from Jackie Chan and Disha Patani, the Stanley Tong-directed film also featured Sonu Sood and Amyra Dastur in pivotal roles. Jackie Chan played the role of a professor while Disha was cast as a student of History. The film tracks Jackie Chan’s expedition to discover a treasure in Tibet. Sonu played the role of an antagonist in the film.

Disha Patani, who made her Bollywood debut with Neeraj Pandey’s M S Dhoni: The Untold Story was last seen in Baaghi 2 opposite Tiger Shroff. Disha is also part of Salman Khan’s Bharat in which she plays the role a trapeze artiste. The film also stars Katrina Kaif, Nora Fatehi and Tabu.