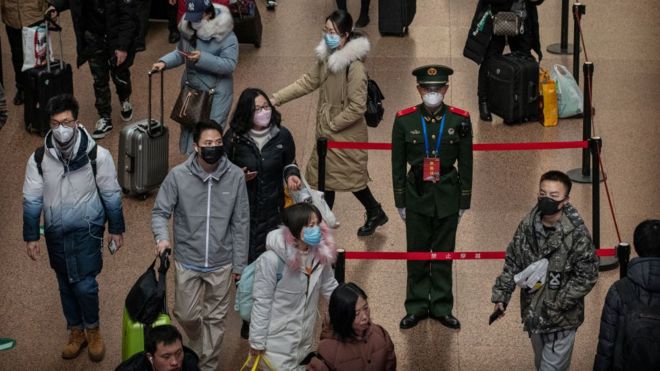 As public health concerns rise over a new virus, the impact is being felt by China’s travel and tourism sector.

More than 400m Chinese were expected to travel over the Lunar New Year which starts today, normally one of the busiest periods for airlines, hotels and tourist attractions.

Instead, flights and hotels are being cancelled as people face travel restrictions or choose to stay home.

The virus has already taken 25 lives, with more than 800 cases globally.

Many airlines have agreed to refund fares or let passengers rebook free of charge if affected, while major hotel chains are now following suit as more travel restrictions are announced.

Hong Kong’s national carrier Cathay Pacific was among the first airlines to allow passengers scheduled to fly to or from Wuhan to reschedule for free while, at the same time, allowing cabin crew to wear surgical masks on flights.

Wuhan is where the first cases in the outbreak were reported. The flu-like virus has since spread to several our parts of China and internationally with cases being confirmed in Singapore, Thailand and the US among others countries.

China’s biggest online travel agency, Trip.com, is also waiving cancellation fees on all hotels, car rentals and tickets for tourist attractions to Wuhan and is ”actively monitoring the situation to ensure the safety of all travellers”.

Hotel groups are also paying out refunds to tourists who want to cancel trips to Wuhan and other parts of China.

Both InterContinental Hotels Group (IHG) and Hyatt will allow guests to change or cancel stays at the majority of their Chinese hotels over the Lunar New Year holiday. IHG has 443 hotels in China, Hong Kong, Macau and Taiwan under different brands, with four in Wuhan.

Casino operators have also seen shares fall, particularly those with businesses in Macau. The city is home to casinos owned by Las Vegas Sands and Wynn Resorts.

The release of seven movies over the Lunar New Year has also been postponed.

Tourism has become an increasingly important part of the Chinese economy and is estimated to contribute about 11% of China’s economic growth and employ about 28 million people.

In 2018, 62.9 million tourists visited China, ranking it the fourth most popular tourist destination behind France, Spain and the US, according to the UN’s World Tourism Rankings.

Outside of China, luxury goods brands are also likely to take a battering as Chinese tourists stay at home rather than travel overseas for shopping sprees. LVMH, which owns the Burberry, Louis Vuitton and Hermes brands, saw its value slide this week.